"Thank you for giving us our dad back."

“If you had told me a year ago that I would have what I do today, I wouldn’t have believed it.”

This is the way James Mincks talks about the remarkable changes in his life allowing him to be the kind of man and father he wants to be to his sons today.

James’ story is not an easy one. It contains many setbacks, including his dropping out of high school, becoming addicted to meth and serving a period of incarceration. Although he spent some time caring for his sons when they were very young and their mother was working, he admits he “was just there” and not really engaged with his children. His addiction and a number of poor choices led to his conviction as a felon and time spent in the Department of Corrections. In July 2018, he “home planned” to Victory Mission in Springfield, Missouri, where his life began to change.

At Victory Mission, James committed himself to completing the “Restoration Program.” Part of the program includes participation in New Pathways for Good Dads for all men who are fathers. It also involves an opportunity to be part of Jobs for Life. Though it wasn’t always easy to work through issues from his past, James was determined to make something different of his life. When he applied for a position at SMC Packaging in Springfield, he was one of three out of 17 applicants to be hired for the open positions. Today he speaks proudly of the promotions he has earned at SMC Packaging and the way it has changed his life. “I have vacation days, benefits and things people told me I would never have,” he says.

James also noted how his attitude changed with regard to supporting his children. “I used to resent having to pay,” he said, “because the boys’ mother made more money than me. Today I’m happy to do my part because they are my children.”

What difference does a supportive environment, a job and new confidence make for someone like James? You could ask his sons, ages 7 and 10. They would tell you that their dad planned a first ever birthday party last December, took them shoe shopping for new shoes at the beginning of summer, and financed their back-to-school shopping this fall. Following that, he arranged for family photos. One proudly features James with his boys with a sign proclaiming, “Thank you for giving us our dad back.”

Hear more of James' story in this Good Dads podcast. 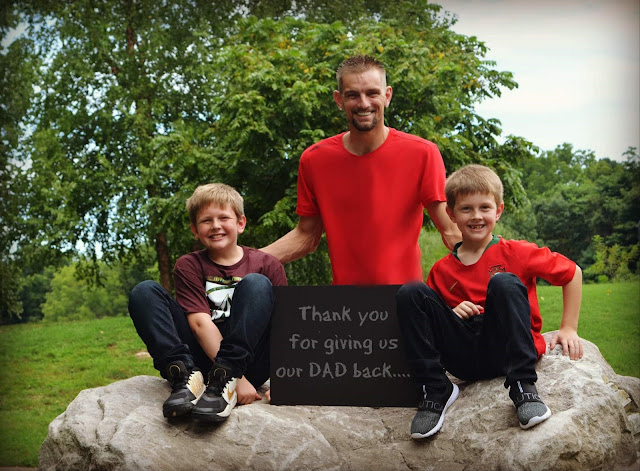 New Pathways for Good Dads is a Good Dads program made possible by a Healthy Marriage and Responsible Fatherhood contract through the State of Missouri's Department of Social Services, Family Support Division.
Posted by GoodDads at 11:13 AM